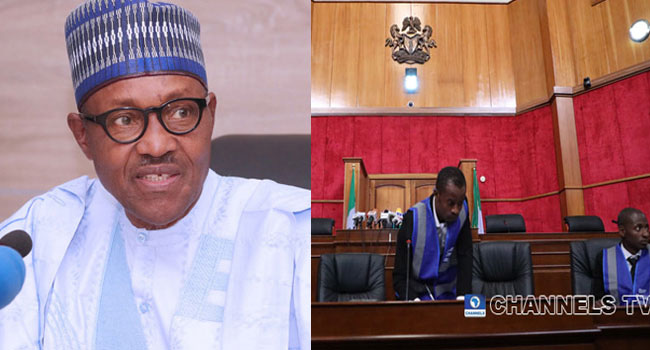 A political party, Hope Democratic Party (HDP), has filed a motion seeking an order of the presidential election tribunal restraining President Muhammadu Buhari from presenting himself to be sworn-in on May 29th, 2019.

The party is also seeking an order restraining the Chief Justice of Nigeria from swearing-in, administering the oath of office and oath of allegiance to the president on May 29th, 2019.

In a motion on notice made available to journalists on Tuesday, Hope Democratic Party filed the motion on six grounds pursuant to section one subsection two of the 1999 constitution as amended and under the jurisdiction of the tribunal.

Some of the grounds of the application is that there is a pending petition challenging the election and return of President Buhari as the winner of the February 23 presidential election.

The Hope Democratic Party also said the petition has been served on President Buhari and pleadings have been exchanged.

The Hope Democratic Party claimed that inspite of the pendency of the legal action against President Buhari, he has been making frantic efforts and preparation for his inauguration on May 29, 2019, by the CJN.

The party further said that unless President Buhari restrains from presenting himself for inauguration he will foil ” a fiat accompli and state of hopelessness on the court and render their petition nugatory.

The Hope Democratic Party also averred that the law is settled that once a question of the validity of an election of any person is challenged that person is not competent to take oath of office or assume the seat of power.

The respondent including counsels to President Buhari, the All Progressives Congress (APC) and Independent National Electoral Commission (INEC) said they have not been served with the motion.

However, the petitioner has announced the application.

Other petitions challenging Buhari’s victory are filed by other political parties. They include the major opposition party, the Peoples Democratic Party (PDP) and its presidential candidate, Alhaji Atiku Abubabar