The Serial Killer Confesses : When I need Blood ,I Lure A Lady To Hotel 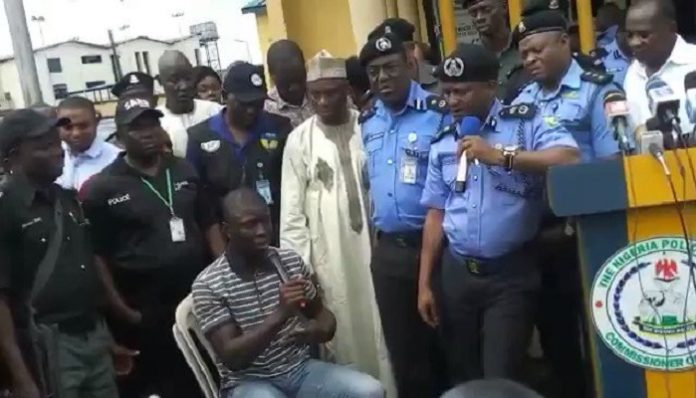 According to the Rivers State Commissioner of Police, CP Dan Daura, the culprit has given names which shall soon be made known to the public.

He quoted the serial killer said the following…

IN HIS WORDS: “I was a committed member of the Deygbam Confranternity which I later denounced and joined the OPM Rehabilitation home before I left for Salvation ministries who refused to give me an accommodation.”

“I have made lots of money from robbing my victims of their valuables, such as phones, jewellery which I sell them after killing the ladies, few times they had raw cash on them, I make them give me their ATM pin, with which I withdraw cash from after killing them.”

“Whenever I need blood I enter the road looking for girls willing to accept cash for short time with me, I offer 100k to 200k to persuade them.

“Sometimes I call them much later to try my luck some will accept to follow me.”

Revealing on how he was arrested, CP Dan Daura said: “It was easier to trap him because of the repeated cloths, he pays the hotels to launder it for him, when it is returned, he proceeds to kill the girls while tying towel, before changing to his clothes and leaving.

“His homelessness frustrated him a lot so he lives from hotel to hotel, state to state.

“He has given us names, the names which will be trail from today, releasing such sensitive information will not help the investigation.

“He made use of the pillow cases as he threatens the girls with the knife to cooperate, that he wants to tie them up, rob them and leave. They comply, and allows them tie them up, their hands, legs and mouth, while the TV volume is high. After restraining them and getting their pin, he proceeds to kill them by using the 4th torn bedsheet to stangle them.

“Actually he killed all the girls and described in details how he killed each of them. He will be taken round town to confirm the hotels he stayed in as he has forgotten most of the names.

“The other suspects in custody were arrested before they arrested him, and he confessed.

“The various hotels that dumped bodies of the victims far away from their hotels such as Odili road and Waterlines, will be brought to book.

“Henceforth the police has mandated hotel owners to instal CCTV cameras and carefully do a thorough checks of room because in some of the hotels he lodged, he confessed to the receptionists not asking for identification, and instead money to process the lease of the room.

“He was caught with the phone of the last victim on him as well as her money. He was running to Uyo and was accosted in an AKTC vehicle along East West road, when the CP sent out an SOS based on the CCTV footage released by the hotel. And he was wearing the same outfit he wore on the CCTV camera